(4/10) In a nutshell: The 1912 American film Dr Jekyll and Mr Hyde is the earliest surviving film adaptation of the novel. It’s not an especially well directed, but a decently acted and fairly entertaining version.

One of the most adapted books in the world is Robert Louis Stevenson’s Strange Case of Dr Jekyll and Mr Hyde – or Dr Jekyll and Mr Hyde for short, as there are over 120 known film adaptations and dozens of stage versions. There is endless debate over whether or not the book qualifies as science fiction, with the purists settling firmly on the ”not” side. Since I am taking the broad road on his blog, I fail to completely see why. It is, in any case, the story of a scientist using science (a potion) to change not his appearance, but losing his personality and morals in the act, and using science to stop his ailment when the experiment goes sour. It is both a moral tale about balancing your dark and light sides, and a cautionary tale about the progress of science, much like Mary Shelley’s Frankenstein. In my book those are the premises for science fiction.

This version, made in the US in 1912, is a short and very basic 12 minute retelling of the story. It was not the first adaptation of the film, but probably the earliest surviving version. As far as I can tell, it is actually the 6th version of the book.

Richard Mansfield pioneered the portrayal of Jekyll/Hyde in his iconic performance on stage in 1887 and for many years to come. Most of the early film versions are copies of Mansfield’s portrait.

The first known film version of Dr Jekyll and Mr Hyde was made in 1908 by the Selig company, he film giant Edison’s greatest rival at the time. It was directed by Otis Turner, perhaps best known for directing the earliest surviving version of Frank L. Baum’s novel The Wonderful Wizard of Oz. ”Regarded by many as a prestigious production, the critics were enthusiastic, giving the actor in the title role special mention. ‘The change is displayed with a dramatic ability almost beyond comprehension.’”, Wikipedia tells us. It was based on a four-act stage play, condensed down to 16 minutes, or one film reel. Apparently it was filmed on a theatre stage in Chicago. It starred Hobart Bosworth in the title role, one of his first film roles, after leaving an acclaimed theatre career on Broadway because of tuberculosis, that robbed him of his voice. The answer was silent film in the warm conditions of first Arizona and the California, where he became one of the pioneers of Hollywood, and later starred in a string of high profile films, both silent and talkies. He appeared in the futurist sci-fi comedy Just Imagine in 1930, and had a role in the 1938 serial The Mysterious Island, based on the book with the same name by Jules Verne.

Another prominent version was made in 1910 by Danish master director August Blom, who later made Atlantis (1913), a Titanic parable, and the first full length science fiction feature The End of the World (review) in 1916, depicting an apocalypse brought on by a passing comet. This film, called Den Skaebnesvangre Opfindelse (The Fatal Invention, also known as Dr Jekyll and Mr Hyde), is a lost film, but is said to be more accurate to the book than most of the earlier and many of the later films, that were based on stage plays rather than the novel itself. One of the roles featured Viggo Larsen, also a legend of Danish cinema, both as producer and director, as well as writer and actor.

The 1912 version starred James Cruze, who later went on to become a fairly successful Hollywood director, perhaps best know for the 1923 western The Covered Wagon and the 1933 drama I Cover the Waterfront. He also acted in over 100 movies. In this film he does a fair portrait of the title character(s). His portrayal of the white-haired Dr Jekyll is nuanced and very naturalistic for the age. His handsome features contrast dramatically with the grotesque make-up of Hyde – make-up that is so much over the top that it looks like a Halloween costume. The film is packed with actresses who were all leading ladies and major or minor stars of the early silent Hollywood era, perhaps most notably Florence La Badie. According to IMDb, “she became the best-known of all of Thanhouser’s players and was wildly popular in fan magazines and trade journals”. She suffered a tragic death in a car accident in 1917. Jane Gail who appears as an extra in this film, would play the fiancée in a remake in 1913 opposite Hollywood star King Baggot (review). Gail rose to prominence by never becoming quite as famous as the leading men she acted against. Four years after Jekyll & Hyde she would be seen as a wild girl in a leopard dress (actually a long lost Indian princess) in the 1916 version of 20,000 Leagues Under the Sea (review). Marie Eline plays a little girl who gets knocked down by Hyde in a scene. Because of her many apperances in Thanhouser’s films she received the nickname “The Thanhouser Kid”. Uncredited actor Harry Benham many years later revealed that he actually played Hyde in many scenes simply to make the shooting easier. 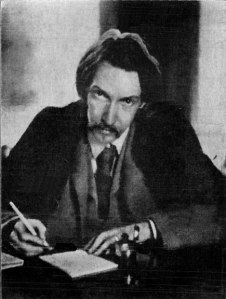 For director Lucius Henderson this, one of his earliest films, seems to be the pinnacle of his career. The 12 minute film is filled with constant jumps from one scene to another, and Jekyll/Hyde does little more than run in and out of his lab and other extremely nondescript outdoor locations. Jekyll’s fiancée becomes little more than a prop and we don’t really get to know any other character either. To Henderson’s credit one must point out that the large host of short films of the era suffered from these problems. For the age, this was mediocre, but not bad direction. Credit must go to the fact that Henderson also films buildings, walls and rooms at angles, and not just straight on. The film does suffer from extremely boring sets, though – in many shots most of the frame is taken up by blank walls.

The story is simple enough: Jekyll experiments with a new potion, and with a replacement shot he turns into Jekyll. Later he turns into Hyde again without the potion, does some mischief, runs back in, drinks antidote, repeat three times, then he attacks his fiancée, kills a police officer, gets chased into his lab, spills the last of his antidote and takes poison. Curtain. The film was based primarily on Thomas Russell Sullivan’s stage play from 1887.

After 1912, at least a dozen film versions of the book were produced each decade, with the curious exception of the Twenties, when only a spoof was made – perhaps due to the optimism of the decade in the US, the most prominent country for Jekyll/Hyde productions. Perhaps John Barrymore’s iconic performance in the 1920 version of the film also scared people into not tampering with it. The Barrymore portrayal remains the most well remembered to this day-