No rating due to cannot find the bloody film

In a nutshell: Apparently this 1924 silent comedy is a light-hearted pun on a world ruled by women. It is, though, America’s first all-out full feature length sci-fi film. 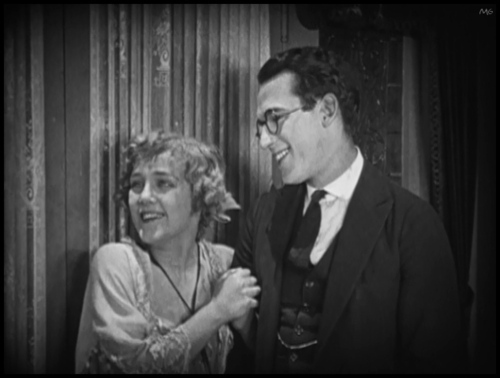 This is not a review, but rather a mention, since I could not find this 1924 silent comedy anywhere. But I thought I should at least give it a shout-out, since it – bizarrely enough – seems to be the first American full-length all-out science fiction film. The 1922 action melodrama The Man from Beyond (review) starring Harry Houdini did contain science fiction elements, as the protagonist was frozen in ice for a hundred years and woke up in present day 1922. The drama film Black Oxen (review) did center around a woman who had undergone a medical procedure to rejuvenate herself, it was more a romantic and social drama than a real sci-fi film. The 1920 version of Dr Jekyll and Mr Hyde (review) is a close rival, but ultimately it is more horror than sci-fi. Even the next all-out sci-fi film made in the US, Just Imagine (review) from 1930, was a musical comedy. If this shows anything, it must be the low esteem that science fiction held in North America, as opposed to Europe, where celebrated directors made serious and expensive sci-fi films that often reflected the turmoil on the continent, stuck as it was between two devastating world wars, with communism and fascism on the rise.

Well according to what I have found out from the sparse information on the World Wide Web, this film is loosely – and I say very, very loosely – based on Mary Shelley’s (of Frankenstein fame) book The Last Man, published in 1826. The Last Man – a beautifully written book, by the way, I highly recommend it – is a very gloomy prophesy of mankind (or should we say ”humankind”) being wiped out by a mysterious plague. It is partly a metaphor for Shelley’s own huge losses – she lost her father at a young age, later her mother, a child and many friends prematurely – and partly a philosophical criticism of her dead friends’ romantic political ideas. It is a cynical view of a world where romantics are and idealists, despite their best efforts, are ultimately doomed to failure, as well as Shelley’s own feelings of loneliness and isolation, both in a social and intellectual sense.

The plague of Mary Shelley’s book does not discriminate by gender. In the 1924 film though, the world is ravaged by a virus called male-itis or masculitis, the name varies in different synopsises. All males over 14 are killed, and the women take over the world. Enter Elmer, a hermit who fled the world and love to live in a forest before the virus and survived, and his previous girlfriend, who suddenly has to fight for his man with all the women of the world. Humour apparently ensues.

The film came out five years after women were allowed to vote in USA, and this setup gives the filmmakers plenty of opportunity to point out what a silly, silly, silly world it would be if we had a woman for president and the States were run by ”Senatoresses”. Apparently it still stays within the limits of good taste. ”Of course we’d never see a film like this made today, but it was often funny and charming, and the audience had a good time with it”, writes Mike Carappa of thisisfamous.com. ”As for the concept of women now running the world on their own without the help of men – instead of making these females strong, powerful, women who skillfully take on their roles in this futuristic world and run with it, they are instead shown to be rather silly creatures who are completely desperate to get themselves a man! But, of course, it’s all in fun – and, hey, they do need to somehow keep the human population going”, says silentmoviecrazy.com. The film holds a 5.8 rating at IMDb. 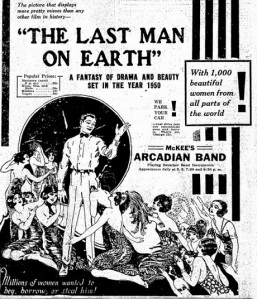 The Last Man on Earth was directed by John G. Blystone, who seems to have been pretty busy making movies between 1915 and his death in 1938, but not much of any greater importance. Earle Foxe as Elmer seems to have been a fairly successful actor up until the early 1940’s, specialising in playing villains. Grace Cunard, playing Elmer’s wife, was something of a serial queen for Universal between 1914 and 1918, but later played mostly in B-movies, although she also went on to write and direct films of her own. The tall Derelys Perdue, playing the mobster Hattie, also seems to have been a minor silent star, especially known for playing tough women, perhaps due to her unusual height.

This is one of the first films to toy with the Empty World-theme, although Danish 1916 film The End of the World (review) did it way before this one. A world with only one man in it could be seen as a dystopia or utopia, perhaps depending on whether you are that one man or not (and whether you are heterosexual).

3 thoughts on “The Last Man on Earth”