(6/10) In a nutshell: The third ”invisible man” installment is a good, solid comedy with a great female heroine, but hardly brings anything new to the sci-fi table. 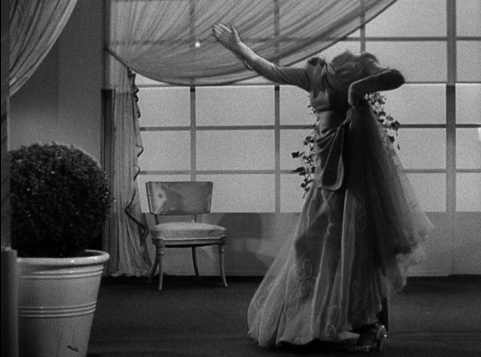 Virginia Bruce not seen in The Invisible Woman.

Number three in the Universal Studios Invisible Man franchise takes the humorous elements of its predecessors to a new level. While James Whale added his pitch-black witty comedy to The Invisible Man (1933, review), it always remained at heart a horror film. Joe May toned down the horror for laughs in The Invisible Man Returns (1940, review), but still kept the serious mystery thriller element dominant. With director A. Edward Sutherland, one of the original, Keystone Cops, it is slapstick comedy all the way, and now there is very little, if anything, to remind the viewer of H.G. Wells’ original novel written in 1897 – which still gets screen credit. 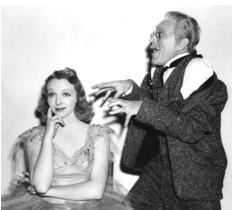 The plot follows Kitty Carroll (Virginia Bruce), a feisty department store model who gets fired after complaining about the way their boss Growley (Charles Lane) treats the girls. In search of adventure – and to get back at Growley – she volunteers to let the dotty Professor Gibbs (John Barrymore) try to make her invisible with his serum and machine. Of course when Gibbs finds out that K. Carroll is a woman and not a man, he is hesitant to let her get naked for him (clothes, as we know, don’t turn invisible). But the adamant Carroll convinces him, and then runs off to take her (mild) revenge on the boss.

Add to this a band of gangsters trying to get their hands of the machine, led by an emotional Oskar Homolka and a hilarious Donald MacBride as Foghorn, and a young, broke playboy (John Howard) who has gone bankrupt by helping the professor in his experiments, now hoping to cash in, and we have the makings of a good old-fashioned forties romantic gangster comedy. No point in laying out teh details, I’m sure you get the idea.

The film’s claim to fame is that it is the first time in a major Hollywood movie that female full frontal nudity is included. Of course, being the time of the Hays code, it is invisible full frontal nudity, but this being a woman in the title role, it is a lot more evocative than in the previous films, when the fact that the invisible man was, in fact, naked, was barely mentioned. There is an especially memorable scene where Carroll puts on her stockings to show the playboy Richard Russell her figure.

The film is actually quite funny, owing perhaps more to its actors than the script. Virginia Bruce, a popular B-film leading lady with stints as ”the other woman” in A-films, is awesome as the invisible woman. We are far from the usual swooning Universal leading ladies here. Kitty Carroll KICKS ASS, teases men, gulps down booze (alcohol turns out to trigger the serum) and single-handedly knocks out the bad guys. Bruce is great as the confident, adventurous Carroll, and has a strong, deep-ish voice and a charismatic delivery that makes her perfect as the disembodied voice. She almost conjures up the image (hmmm) of the invisible Claude Rains from the original as she trashes her boss’ office and shouts ”Here’s a little something to remember me by!”

John Barrymore (Dr Jekyll and Mr Hyde, 1920, review) is a long way away from his best dramatic roles, but is amusing as the good-natured Professor Gibbs, playing quite a bit older than his actual age of 58. For more on Barrymore, see the review of Jekyll&Hyde, but suffice to say he was probably the most valued stage and screen actor of the twenties in America, and a huge profile in the thirties, despite his grave alcoholism and memory problems. By 1940 he was relegated to comedies, and The Invisible Woman was one of the last films he made before his untimely death brought on by organ failure and pneumonia in 1942.

Long-time comedic actor Charles Ruggles as the timid and fainting butler acquires the role usually reserved for leading ladies in these kind of films, and does a good job with it, although his role is a bit flat.

John Howard is dashing and suave in his role as the baffled hero, but his role is so generically written that he doesn’t get much to work with, and is completely trampled by his co-stars. Howard rose to fame in the title role of a string of detective films featuring Bulldog Drummond (whom I always remember wrongly as Bullfrog Hammond). He would over the years appear in sci-fis like The Undying Monster (1942), Science Fiction Theatre (series, 1955), Men Into Space (series, 1959), Destination Inner Space (1966) and Wonderwoman (series, 1975).

Oskar Homolka does a great job parodying his usual roles as communist or South American villains – here as a mobster who is always close to tears. Charles Lane as Growley does his staple role as a short-tempered, domineering petty tyrant, a role which he played in over 300 films. As one of the models we see, in her first film, Spanish Maria Montez, ”The Caribbean Cyclone”, who would become a sensation in Universal’s cheap adventure films in the early forties, ”even though she could not really act, could not dance and could not sing”, as David Takacs puts it. Another brilliant role is the one of Professor Gibbs’ stern maid, played by none other than Margaret Hamilton, who rose to fame a year before as the Wicked Witch of the West in the legendary The Wizard of Oz. As one of the henchmen we also meet Shemp Howard, one of The Three Stooges. The giant, rugged Donald MacBride was a staple henchman in both crime films and comedies – and scores big with his role as Foghorn who, like other men who enter the invisibility machine without the serum gets “emasculated” in terms of voice.

The ”story” is credited to Joe May and Kurt Siodmak, who made The Invisible Man Returns, but he script is written by a team of slapstick comedy writers. Siodmak, of course, was a prolific horror and science fiction writer, for more on him, see the former film. Jack Otterson and Russell A. Gausman continue to do solid work on sets and art direction, and Frank Skinner’s music is effective without impressing. Special effects wizard John P. Fulton made The Invisible Man Returns just months earlier, and is now breezing through the motions. Although not very much more impressive than his invisibility effects for The Invisible Man seven years earlier, the effects are now more laissez-faire, and unfortunately so is sometimes the execution. In one scene where the invisible Carroll removes her clothes, the black velvet suit underneath is clearly visible in the shot. There are also shady outlines of Bruce here and there in the film, where they shouldn’t be visible. Nevertheless, some of the wirework is still impressive to this day. Director A. Edward Sutherland was, as mentioned, one of the original Keystone Cops, and directed both Abbott & Costello and Laurel & Hardy around the same time as this film was made. As far as I can tell there is no relation to Donald and Kiefer.

Well, this was one of my shorter reviews, partly because it is Christmas and I’m visiting my folks. But mostly because this is a comedy, and as I’ve stated before, comedies are seldom especially interesting for genres, since they mostly rehash old ideas without bringing anything new to the board – there are exceptions, of course. And this is the case with The Invisible Woman. While it is fun to see a woman in the lead, the jokes are pretty standard flapper fare, which was quite commonplace in the twenties – but perhaps seemed raunchier in the forties because the Hays Code had been in effect for so many years, and cinema stripped of much sexuality and especially female sexuality.

By this time, of course, USA was slowly being dragged into WWII, and the horrors of the Nazis were beginning to unfold. It was a dark time in the world, which often was reflected in cinema in a number of ways. One was that the early forties provided a lot of Anti-Nazi films, as well as patriotic superheroes like Superman, who would enter the screen in the form of animated shorts in 1941. Another effect was that the screen saw a lot of escapist films set in exotic locations, with magical mysteries and swashbuckling heroes – and a lot of comedies to help audiences take their mind off the horrors of war.

The comedy in The Invisible Woman is not bad for slapstick, but considering The Marx Brothers, The Three Stooges, Charlie Chaplin, Laurel & Hardy and Abbott & Costello were around at the time, the benchmark is pretty high. And the actors are funnier than their lines. How about Charles Ruggles’ line when bullets from a machine gun hit the ground in front of him: “Those are the noisiest grasshoppers I’ve ever heard”. Yes, I know. I couldn’t contain myself either. 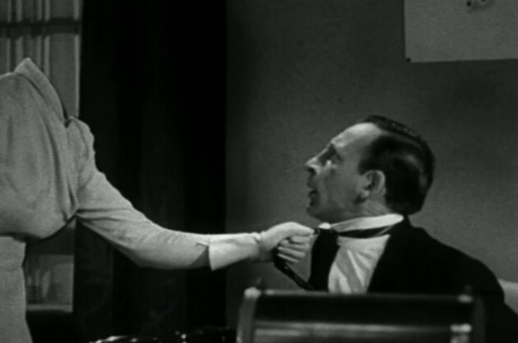 Charles Lane getting roughed up – BY A GIRL!

The sci-fi deviates wholly from the source – the Griffin storyline is erased and Professor Gibbs is quoted as the inventor. And Carroll shows no signs of becoming power-crazy in this film, as a matter of fact, the invisibility doesn’t seem to have any ill effects on her. Curiously enough, Universal – sort of – returned to the Griffin storyline in the next film, Invisible Agent (review), where the invisible man fights Nazis, in 1942. In a way this deviation is rather refreshing. The Invisible Woman is an entertaining comedy without being overly impressive.

7 thoughts on “The Invisible Woman”