(4/10) In a nutshell: The first actual hollow Earth film made in Hollywood, this 1951 cheapo produced by visual effects wizards Jack Rabin and Irving Block is almost a good picture, but stumbles in basically all departments. Pretentious, illogical, naive, chauvinistic, shakily directed and badly acted, but it does move along at a decent pace, is filmed in stunning cave locations and has occasional glimpses of profundity and brilliance. Loosely based on Jules Verne and Edgar Rice Burroughs. 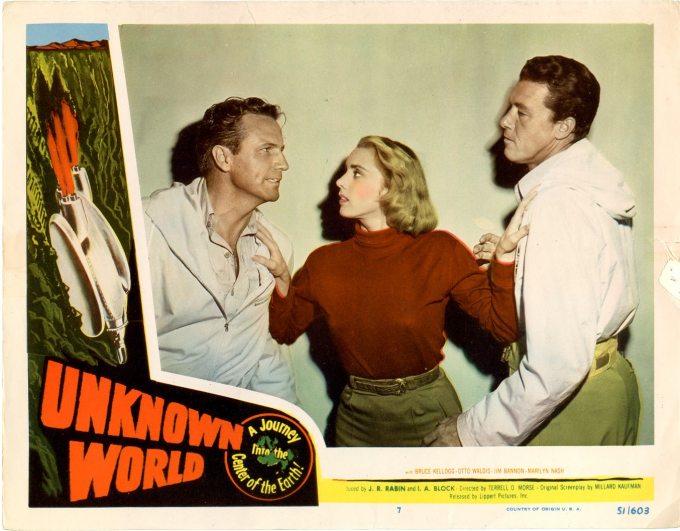 Some guy (seriously, I can’t tell the apart!), Marilyn Nash and Bruce Kellogg in Unknown World.

Released two years earlier, Unknown World might have become a minor cult classic, so novel was its idea in Hollywood at the time. But released in late 1951, the movie faced such stiff opposition from other science fiction films, like The Day the Earth Stood Still (review), Superman and the Mole-Men (review), When Worlds Collide (review) and Flight to Mars (review), that it was a bit overlooked. And unfortunately it hasn’t received the same sort of delayed love as other cult classics by later generations, either. The main reason being that it is neither very good nor campy enough to be loved by the so-bad-it’s-good fans. But for any completist sci-fi fan it is definately a must-watch, since it is the first full-length feature film to tackle the hollow Earth genre. END_OF_DOCUMENT_TOKEN_TO_BE_REPLACED

(4/10) In a nutshell: George Reeves parades through this first full-length Superman film in clearly visible shoulder and chest pads, which says just about everything about the production values of the B effort, made as it was as a pilot for the successful TV series Adventures of Superman. The script is confusing and thin, but very sympathetic and sincere, and Reeves saves the day through his innate charm.

Superman and the Mole Men poster.

Superman and the Mole-Men (1951) was the first full-length Superman film brought to American audiences. This low-budget production was, in fact, not so much a film that was intended to stand on its own legs, as it was a pilot for a planned Superman TV series. The 58 minutes long movie was produced by Lippert Picturs, the company behind the low-budget surprise hit of 1950, Rocketship X-M (review), the first serious US film to feature a space adventure. The TV series was picked up by ABC, and started airing 1952, and to the surprise of everyone involved, became a major hit show, turning Superman actor George Reeves into a national celebrity. END_OF_DOCUMENT_TOKEN_TO_BE_REPLACED

(3/10) In a nutshell: Inspired by Flash Gordon and The Phantom Empire, the young Republic Studios launched their own sci-fi serial in 1936, and the result was an action-packed, but rather brainless concoction relying heavily on horse chases and pointless crowd battles. Occasional good design and an energetic Crash Corrigan, nice action scenes, or even some merited actors can’t save this awfully scripted and blandly acted Atlantis-themed hotchpotch.

I’ve stated numerous times that I normally don’t review serials. But I can’t seem to keep away, can I? Well, just to put my review of Flash Gordon (1936) in perspective, I’ve decided to write a few lines on Undersea Kingdom, released barely two months after Flash. The cheap ripoff showcases almost everything that Flash Gordon got right, by getting it all wrong. Nonetheless, for some peculiar reason, the serial seems to hold a very special place in the hearts of the friends of the Republic serials. Admittedly, it is not without its technical merits, and one does learn to enjoy the horrible acting the way one enjoys Plan 9 from Outer Space. END_OF_DOCUMENT_TOKEN_TO_BE_REPLACED