(7/10) In a nutshell: Kosmichesky Reys: Fantasticheskaya Novella is a stunning, costly Soviet moon landing adventure from 1935, inspired by Fritz Lang’s 1929 film Woman in the Moon. Thanks to the collaboration of a noted space and rocket scientist, it is impressively accurate. The film is aimed at a juvenile audience, and it’s a very enjoyable and exciting space adventure movie. 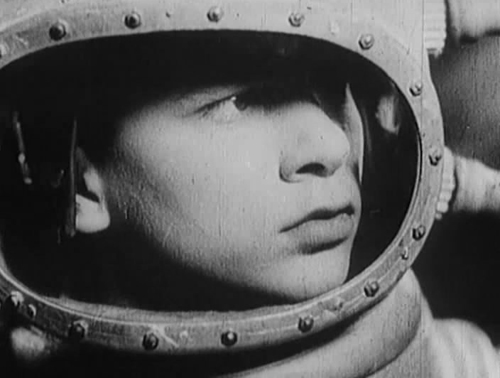 Cosmonaut Andryusha (Vassili Gaponenko) is a child actor who actually managed not to be annoying.

Kosmicheskiy Reys: Fantasticheskaya Novella, known internationally as Cosmic Voyage or The Space Voyage, is without a shadow of a doubt the best science fiction film to come out of the USSR in the thirties. More so, it is probably the best sci-fi movie to come out of Europe in the thirties, which is a pretty sad statement on the European science fiction scene in that decade (though we sort of did have other stuff than moviemaking to think about at the time …). Although aimed at a juvenile audience, the film is based on hard (albeit speculative) science, and depicts a journey to the moon as realistically as was possible in 1935. Fritz Lang came even closer to reality with his eerily accurate 1929 film Woman in the moon (review), but Cosmic Voyage isn’t far off the mark. Released in late December 1935, the film was the last all-out science fiction film to be released in the Soviet Union until Nebo Zovyot (The Heavens Call, released re-edited and with additional footage as Battle Beyond the Sun in the US), released in 1959.  END_OF_DOCUMENT_TOKEN_TO_BE_REPLACED

(9/10) In a nutshell: This is one of film giant Fritz Lang’s sillier movies, about a party going to the moon in 1929 looking for gold. If you’re not sitting around just waiting for the moon stuff to happen, the spy-themed build-up is sheer cinematic delight, with Lang clearly having loads of fun. The impressively scientifically accurate moon trip served as a blueprint for every rocket launch film since.

Gerda Maurus as the Woman in the Moon – properly dressed for lunar adventures.

Frau im Mond (1929) has a bit of a patchy reputation – some regard it as one of Austrian cinema legend Fritz Lang’s masterpieces, others see it as a short bit of sci-fi excitement sandwiched between over-long schmaltzy melodrama. I am almost inclined to agree with the first assessment, but I can certainly understand the latter. However you look at it, no-one can deny the impact it had on latter moon launch films, nor the film’s astounding visionary scientific accuracy. END_OF_DOCUMENT_TOKEN_TO_BE_REPLACED

(10/10) In a nutshell: The plot may be slightly simplistic and the political message naive, but the thematic and visual influence of Austrian director Fritz Lang’s exciting 1927 masterpiece Metropolis is rivalled by few in science fiction and in film in general. A great, entertaining, sprawling epic in a future tower of Babylon.

Few films have been so much written about and analysed as Austrian director Fritz Lang’s stupendous epic Metropolis. Not only is this dystopian sci-fi classic with political and religious undertones one of the most influential sci-fi films of all time. It is also one of the films that has had the biggest influence, not only on the movies, but on art, literature and even architecture and design, in history. Despite all this, Fritz Lang himself disowned the film nearly from the day it was released. END_OF_DOCUMENT_TOKEN_TO_BE_REPLACED