(3/10) In a nutshell: The second of the proto-James Bond films featuring Dick Barton, special agent pitches Dick and sidekick Snowy against a megalomaniac villain with a stolen death ray machine. A weak script, bad acting and clumsy filming are not quite weighed up by some campy humour, moments of cinematographic noir-delight and a thrilling ending scene at a lighthouse. Watch out for The Avengers star Patrick MacNee.

This was the second Dick Barton film made in Britain, but it was released in 1950 as the third, as the up-and-coming low-budget studio Hammer Films thought the third one was superior and wanted to get it out on the market fast to drum up more interest in the franchise. I reviewed that film, Dick Barton Strikes Back, earlier, so I won’t go into the particulars over Dick Barton and the franchise, but the short-short version is this: END_OF_DOCUMENT_TOKEN_TO_BE_REPLACED

(5/10) In a nutshell: A proto-James Bond battles an evil villain set to rule the world with his secret weapon that turns brains into jelly in this first science fiction entry by Hammer Films in 1949. It’s a juvenile quota quickie with an often less than perfect script, and some hammy acting, but with surprisingly solid production values, great atmosphere and good pacing. 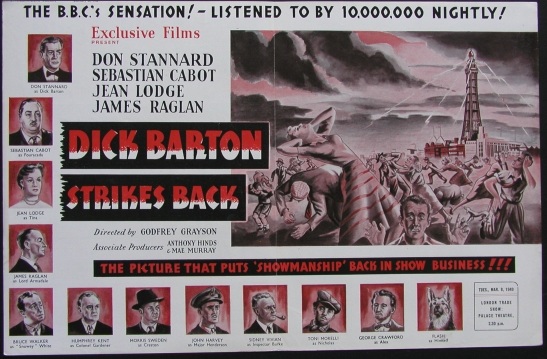 We have another British sci-fi(ish) film! After years of licking their wounds from the financial disaster that was H.G. Wells’ Things to Come (1936, review), the British film industry rediscovered the genre in the late forties. After the time travel comedy Time Flies (1946, review) and the robot bedroom farce The Perfect Woman (1949, review), we get Dick Barton, special agent, in this 1949 mystery thriller, Dick Barton Strikes Back, featuring a James Bond-styled villain with a secret futuristic weapon. END_OF_DOCUMENT_TOKEN_TO_BE_REPLACED