(4/10) In a nutshell: Universal’s 1945 film marks the end of the era of the original Universal monsters, and at the same time the end of the American sci-fi film of the forties, more or less. Lon Chaney Jr. and John Carradine star alongside Onslow Stevens and Poni Adams in this rushed, inconsistent last huzzah for the monsters. Despite flashes of originality, it feels as if we are re-heating the same TV dinner for the umpteenth time as Frankenstein’s monster is once again found, buried in quicksand in a cave under a castle after having six building collapse on him in previous films, Dracula re-emerges after having been destroyed by the sun’s rays a third time in the last film, and we get to wonder if the Wolf Man will cheat death for a third time.

John Carradine as Dradula and Martha O’Driscoll as his love interest.

This here is the movie that ended the original Universal monster franchise, unless you count The Creature of the Black Lagoon (1954) to the same series. Personally I consider it more of a symptom of the second wave of monster films kicked off by the science fiction craze of the fifties, even though the films have since been repackaged in DVD boxes along with the original monster films. It was also the last film that featured the original Universal monsters before they began to get spoofed in the Abbot & Costello films, which you won’t see reviewed on this blog. END_OF_DOCUMENT_TOKEN_TO_BE_REPLACED

(4/10) In a nutshell: Universal’s horror stars gang together for the franchise’s second monster bash in a film that is a mix of good and mad. There’s too much going on in a too short period of time, Dracula is thrown by the wayside and the plot holes are big enough to fill a stadium. But there’s also a dash of originality and some first-class acting in this 1944 film.

Quick! Give me the five greatest mad scientists of the forties! Did you say Boris Karloff, John Carradine, Lionel Atwill, George Zucco and J. Carroll Naish? Great, now you have them all in one film! This was the second monster mash movie after the success of Frankenstein Meets the Wolf Man (1943, review), starring Lon Chaney Jr, Bela Lugosi and Lionel Atwill. Lon Chaney also turns up in House, again as Larry Talbot/The Wolf Man. The film is sometimes referred to as ”The House of Frankenstein” and sometimes without the prefix. END_OF_DOCUMENT_TOKEN_TO_BE_REPLACED

(5/10) In a nutshell: Another decent, but not in any way brilliant, mad scientist film from Universal. This 1943 movie is one of the rawer of the horror films from Universal after the enforcement of the Hays code, and basically deals with temporary zombification. Good performances, good makeup, too much operetta, a low budget and a slim script puts this at the middle of the scale. 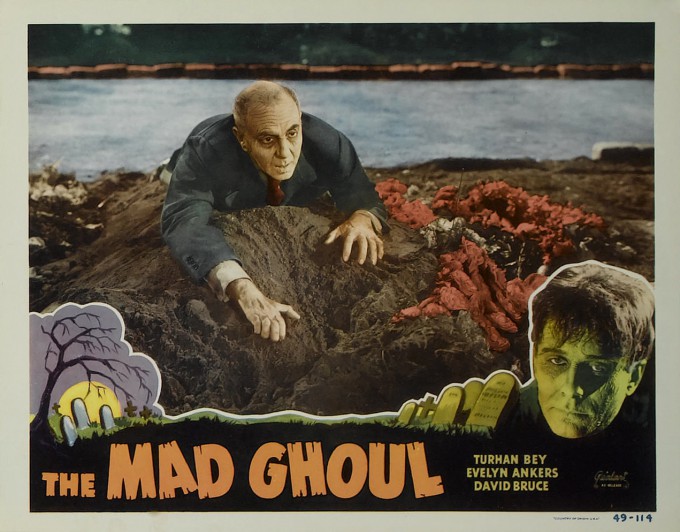 Poster from one of the creepier scenes from The Mad Ghoul.

The crowning achievement of Universal’s horror franchise was The Bride of Frankenstein in 1935, and after that the studio’s output slowly waned in quality. Despite the huge success of The Wolf Man (1941), the horror films were decidedly B movie fare in the forties, as Universal churned out one movie after the other without ever sinking to the abysmal depths of Poverty Row ripoffs, however. A classic example of a forties Universal horror sci-fi film is The Mad Ghoul from 1943. It is filled with modestly talented B actors and has decent production values, and even some original ideas, but still stumbles on the script department as the setup is already all too familiar. END_OF_DOCUMENT_TOKEN_TO_BE_REPLACED

(5/10) In a nutshell: Director Edward Dmytryk cuts and pastes together a surprisingly coherent and enjoyable tale of a gorilla being turned into a woman by a mad John Carradine in his first mad scientist role. The 1943 film made the mysterious Acquanetta an over-night star, and garnered two sequels, despite the fact that one third of the movie is reused footage from an old lion-taming film.

Acauanetta as Cheela the ape woman in Captive Wild Woman.

Come and see ACQUANETTA the VENEZUELAN VOLCANO as the terrifying APE WOMAN! Watch as she lures men to their death with her savage beauty! That wasn’t a tagline for Captive Wild Woman, I just made it up, but it could well have been. When we think of the Universal monster movies post-1941, we usually think of it as the time when the studio simply milked money out of the series by teaming up their creatures in one bad B film after the other. But this actually wasn’t really the case. In 1943 Universal added yet another monster to its roster, and this time it was a woman, in the form of the exotic and mysterious actress Acquanetta as Cheela the ape woman. END_OF_DOCUMENT_TOKEN_TO_BE_REPLACED

(3/10) In a nutshell: The first of Universal’s monster mashes, made in 1943, sees the studio finally dropping the ball in their monster franchise. What could have been a decent, fun B horror flick is ruined by Univseral first casting Bela Lugosi as the Frankenstein monster and then doing its best to erase him from the film.

Bela Lugosi and Lon Chaney Jr. have a standoff in a promo shot for Frankenstein Meets the Wolf Man.

By 1943 Universal’s Frankenstein franchise had lost all roots to Mary Shelley’s Frankenstein apart from the name. Scriptwise there isn’t even much proof that it is part of the same francise as the original 1931 Frankenstein (review). There isn’t even a Dr. Frankenstein in the film (on screen anyway). The original Dr. Frankenstein, Colin Clive, passed away in 1937 and one must say that it is to the studio’s credit that they didn’t try to replace him with another actor (apart from a brief hallucination sequence in The Ghost of Frankenstein (1942, review), but instead had not one, but two, sons of Frankenstein take up the mantle, Basil Rathbone and Cedric Hardwicke. One might suppose that Universal thought that a third son might be pushing it. We do, though, get a granddaughter of Frankenstein in the shape of Ilona Massey, but she is no doctor (she’s a woman, d’uh). END_OF_DOCUMENT_TOKEN_TO_BE_REPLACED

(5/10) In a nutshell: The fourth of Universal’s invisible man films, made in 1942, has a Griffin descendant fight Nazis in Germany. The special effects are impressive, as is much of the cast, incliding Cedric Hardwicke and Peter Lorre. But the comedy is lame and the script by Curt Siodmak falls far from his best efforts. Still, it is fairly entertaining as bit of a jumbled spy thriller.

I almost feel like I’ve got to apologise for posting yet another bland five-star review. But that’s just the thing with a lot of the sci-fi in the late thirties and early forties. The momentum that drove especially the mad scientist subgenre in the first half of the thirties was gone, and many of the directors that created such visionary films had been replaced by studio hacks. But on the other hand: even when relegated to Povery Row studios and bigger studios’ B units, there was still a lot of talent surrounding the genre, who were often able to elevate the films above their slight budgets. Such was the case with Invisible Agent. END_OF_DOCUMENT_TOKEN_TO_BE_REPLACED

(5/10) In a nutshell: The magic is all but gone from the fourth Universal Frankenstein picture, made in 1942. Although well-paced and fairly entertaining, the film stumbles on a ridiculous script with more holes than a Swiss cheese and a low budget. Decent acting from Misters Hardwicke, Lugosi and Atwill, but substituting Karloff with Chaney was a bad move.

Ludwig Frankenstein (Cedric Hardwicke) and Theodore Bohmer (Lionel Atwill) inspecting Lon Chaney Jr. in The Ghost of Frankenstein, made in 1942.

This is the fourth instalment in Universal’s Frankenstein saga, and notable for a number of reasons. The Ghost of Frankenstein is the first Frankenstein film to be relegated to the studio’s B movie unit, resulting in slashed funding. It is the first film to replace Boris Karloff as the monster with another actor, in this case Lon Chaney Jr. It is also the last film where the Frankenstein monster was the solo monster in Universal’s cannon. The next film, Frankenstein Meets the Wolf Man (review), well the title says it all. END_OF_DOCUMENT_TOKEN_TO_BE_REPLACED

(6/10) In a nutshell: Bela Lugosi’s Ygor is the best thing to come out of the Universal horror stable since The Bride of Frankenstein, but unfortunately the rest of The Son of Frankenstein isn’t really up to the same standard as its predecessors. The expressionistic style is stunning and the acting good across the board, with team members Boris Karloff, Lionel Atwill and Basil Rathbone joining forces with Lugosi. But we mourn the reduction of Frankenstein’s monster to a mute, brute prop.

Karloff in close-up in Son of Frankenstein.

Son of Frankenstein (1939) was the Universal smash hit that wasn’t supposed to be made. In fact, Universal didn’t release any horror films in 1937 or 1938, mainly because of pressure from the PCA, Production Code Administration, set up in 1934 to enforce the infamous Hays code on the US film industry. But happy coincidences and a new-found confidence in the genre made this semi-classic a reality, and once again kicked off a horror-fest in the States. END_OF_DOCUMENT_TOKEN_TO_BE_REPLACED

(5/10) In a nutshell: The last of Universal’s classic horror sci-fi films before the ousting of studio boss Carl Laemmle Jr. The Invisible Ray boasted both Boris Karloff and Bela Lugosi in an uneven, but fairly well made and very entertaining death ray film. Lugosi is seen in a rare heroic role, and Karloff is typecast as a mad scientist. Oh, and human organisms are only part of astro-chemistry controlled by forces from the sun, you know.

The not always very dynamic duo of Bela Lugosi and Boris Karloff in The Invisible Ray from 1936 – along with the ray cannon.

In 1936 we were reaching ”peak mad scientist”, inasmuch as the subgenre’s films in the United States were gradually diminshing in quality, and after flirting with A-films, were now deeply mired in the bad B-movie bog. About two thirds of the mad scientist films churned out by studios in the coming years would be held together simply by casting Boris Karloff or Bela Lugosi as the villain. But The Invisible Ray still managed to cling to some originality, and can in retrospect be seen as one of the standard bearers for the death ray subgenre, not generally known for producing quality films. END_OF_DOCUMENT_TOKEN_TO_BE_REPLACED

(9/10) In a nutshell: With Bride of Frankenstein James Whale created the greatest of all Universal horror films. Superb acting, great casting, a script that balances between drama, horror and campy humour, all rounded up with fluid, expressionistic filmmaking and Soviet-styled montage editing. All this, plus the marvellous Elsa Lanchester as the Bride, Boris Karloff in high form, and a chilly, funny, scary Ernest Thesiger. Greatness abounds, but thematically the film is a bit sloppy.

The superb Elsa Lanchester in her most iconic role as the Bride of Frankenstein.

The Bride of Frankenstein (1935) is one of those films that has been analysed into shreds, so that the legacy of the film somehow overshadows the film itself, very much like 2001: A Space Odyssey (1968). It is one of those rare horror films that even reviewers not generally infatuated with genre films like to promote to the same status as groundbreaking works like Battleship Potemkin (1925) or Citizen Kane (1941) – or at least that is the sense that one sometimes gets from people who are adamant that Bride is one of the most important films in American cinematic history (an interesting notion as most of the key personnel were British). Although it is true that along with Paramount’s Island of Lost Souls (1933, review) this Universal classic is the finest of the American horror films of the thirties, some of its reputation stems from the fact that people like to read topics between the lines that simply aren’t there. END_OF_DOCUMENT_TOKEN_TO_BE_REPLACED