(7/10) Dishing out the best visual effects in US sci-fi up until 1955, This Island Earth is the smartest sci-fi film of the fifties all the way to the middle of the movie, when the two hack screenwriters deviate from author Raymond Jones’ novel, and we plunge into comic book territory. However, this first space opera remains one of the best sci-fi films of the decade, despite a clumsy mutant and the fact that the writers forget to add any actual plot once we get to a distant planet. Features the first ever Miss Finland. 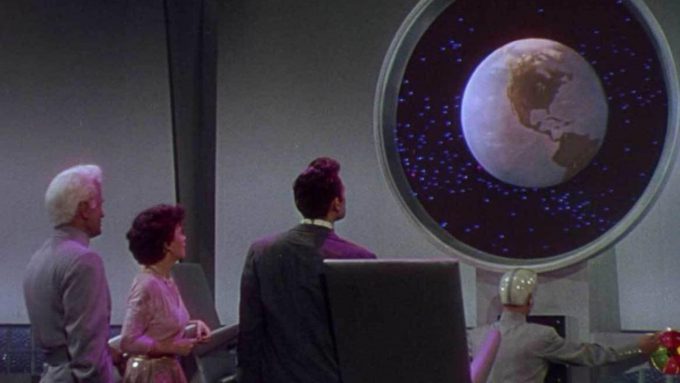 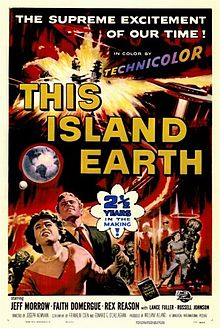 In first half of the fifties, primarily three major studios dabbled in science fiction. Paramount was the front runner, thanks to the lavish Technicolor sci-fi epics of George Pal. Warner got in it for the money when they realised there was a profit to be made from giant radioactive monsters like those in The Beast from 20,000 Fathoms (1953, review) and Them! (1954, review). Universal was probably the one that made the most interesting pictures, because of their range and their quirks. And in 1955, the studio made their most expensive science fiction film to that date, This Island Earth, an ambitious space opera in Technicolor with impressive effects and artwork.

END_OF_DOCUMENT_TOKEN_TO_BE_REPLACED

(7/10) In a nutshell: While Universal made this film in 1954 as a cheap money-grabber to cash in on the 3D craze, they once again underestimated the magic created by combining producer William Alland, director Jack Arnold, actor Richard Carlson and the studio’s brilliant design and makeup team, just as they had done on their previous collaboration. Despite a clumsy and derivative script, the film has some poetic quality and is a superbly directed, action-packed shocker. In good Frankensteinean fashion, the movie puts the audience on the side of the monster, and while the suit might seem hokey today, it was a sensation in its time, and served as a benchmark for science fiction films to come. Whether the film itself falls under the sci-fi umbrella is a matter of debate. 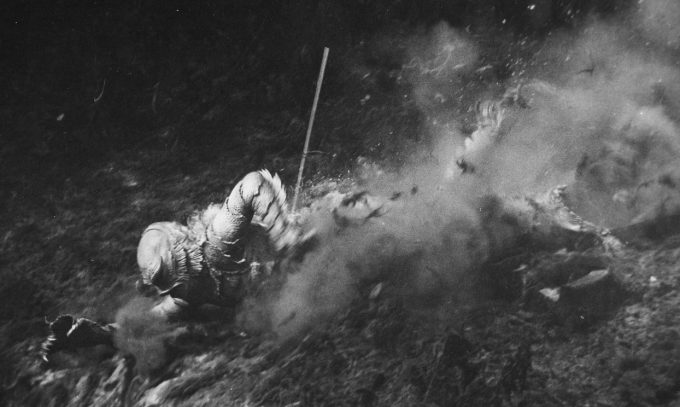 In 1954 the old Universal monsters had fallen into decay a long time ago, and few cared about the old gothic legends like Dracula, Frankenstein’s monster, the mummy or the wolfman. During the forties the studio had milked everything and then some from them, resulting in an ever-declining parade of monster mashes, ending in The House of Frankenstein in 1945 (review). Presently, the old monsters were little more than punchlines in Abbott & Costello films. The political landscape, pop culture and filmmaking had changed. The old style, inspired by German impressionism, 19th century horror novels and Soviet montage symbolism had fallen out of style. The new science fiction style was cleaner, modern, urban and more linear. Nevertheless, the old monster makers still had one last shot in them, before the field was completely taken over by little green men, giant insects and computers-run-amok: Creature from the Black Lagoon. END_OF_DOCUMENT_TOKEN_TO_BE_REPLACED

(7/10) In a nutshell: Sci-fi stalwart Jack Arnold directed this his first science fiction film as Universal’s 3-D splash for the summer of 1953. Prominent sci-fi leading man Richard Carlson plays a proto-Fox Mulder who tries to convince a small town in Arizona that he saw a UFO crash in the desert, while aliens kidnap and and assume the guises of the townspeople. Co-written by Ray Bradbury, this well-directed fable of xenophobia and cold war paranoia manages to both appeal to the pulpier parts of our brains and the intellectual grains of the mind. 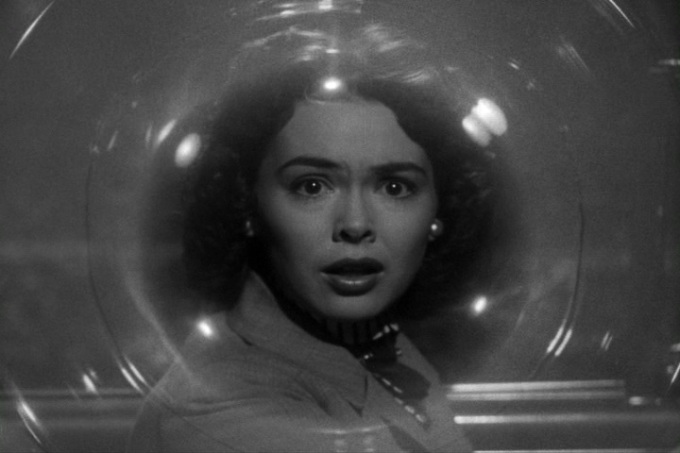 Barbara Rush as Ellen in the xenomorph’s view.

Acclaimed A movie directors like Howard Hawks, Robert Wise and Don Siegel, along with visionary producer-director George Pal, all did their best to coax the science fiction genre out of the B movie quagmire that refused to loosen its grip on it in the fifties. But equally important – if not even more so – for the genre was Jack Arnold, director of films like Creature from the Black Lagoon (1954, review), Tarantula (1955, review) and The Incredible Shrinking Man (1957), among others. Arnold acknowledged the genre’s pulpy roots, and instead of trying to transcend them, he embraced them, but brought a level of intelligence and refinement to his work, and made some of the most influential sci-fi films of the decade. It all started with a film that is often dropped from his resumé when counting his best films, and it is always a mistake: It Came from Outer Space. END_OF_DOCUMENT_TOKEN_TO_BE_REPLACED