(6/10) In a nutshell: This Hugo-nominated 1953 film by William Cameron Menzies is delightfully whimsy and disturbingly surreal, balancing between pure camp and serious psychological questions about adolescence. In a dreamlike reality (or a realistic dream) 10-year old David’s parents and friends are body-snatched by Martians who have landed in his backyard. It’s a race to see if David and his confidantes can blow up the UFO before the aliens have infiltrated the whole town.

1953 was the year when the floodgates finally opened for what we would call ”fifties camp” in science fiction – only three films into the year, I have already reviewed Robot Monster, and now we get to another cult classic: Invaders from Mars. While the former is an entity in and of itself, the latter also has some claim to uniqueness: it was the first alien film in colour. Rushed into theatres in April to beat the premiere of George Pal’s Magnum Opus The War of the Worlds (review), the movie is one of the more bizarre, and beloved, entries in fifties science fiction canon. END_OF_DOCUMENT_TOKEN_TO_BE_REPLACED

(1/10) In a nutshell: Jesus lives on Mars and solves all the Earth’s problems by reading aloud from the bible. That is the notion that this 1952 trainwreck of a film is trying to turn into a pathos-filled and solemn fable about politics, science and the human condition. Fairly well designed, filmed and acted for a low-budget effort, but boy, you can’t polish a turd. (1/10) 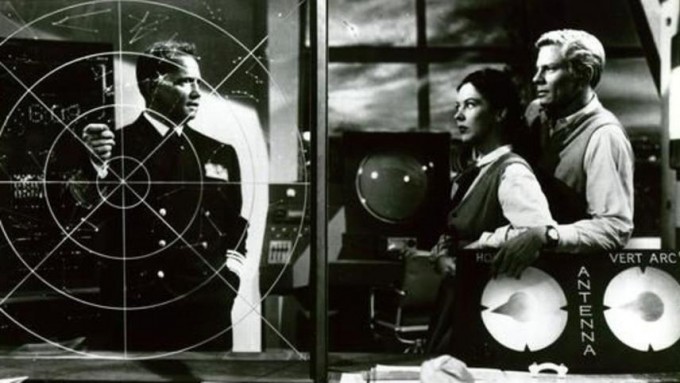 Red Planet Mars is – just like another film I recently reviewed, Invasion U.S.A. from the same year – a perfect time capsule of the hysterical atmosphere of the cold war. It has all the trappings of the most obnoxious, xenophobic, conservative, bible-thumping propaganda movies at the time – and then turns it up to eleven. It’s difficult to know where to start with this one, so I’ll begin with the plot. END_OF_DOCUMENT_TOKEN_TO_BE_REPLACED

(5/10) In a nutshell: Poverty Row studio Monogram jumped the bandwagon on space films in 1951 with this colour movie filmed in five days. The design and effects are not bad for a film of its budget, although much of it is scraped together from found objects, but all suspense evaporates as the space crew settles on Mars and the movie settles into a boring chamber drama with talking heads.

Production still and PR poster from Flight to Mars.

1951 was a tremendous year for science fiction films in Hollywood, especially for films concerning space travel and aliens, subgenres that had only found their way into full-length cinema the previous year. In 1950 producer George Pal had tried to depict a scientifically accurate flight to the moon in Destination Moon (review), and Lippert Pictures had jumped on the wagon with a voyage to Mars in Rocketship X-M (review). In the first two thirds of 1951 spacemen came to Earth, first in The Man from Planet X (review), then in The Thing from Another World (review) and later in The Day the Earth Stood Still (review). END_OF_DOCUMENT_TOKEN_TO_BE_REPLACED

(6/10) In a nutshell: First serious American motion picture to go where no man has gone before. This 1950 Poverty Row movie was rushed into production to beat the lavish Destination Moon to cinemas and take advantage of the media buzz surrounding it. However, in some regards the cheap ripoff actually surpasses the ”original”, thanks to an Oscar-winning screenwriter, one of Hollywood’s greatest cinematographers, good acting and a movie with a good deal of heart and soul. 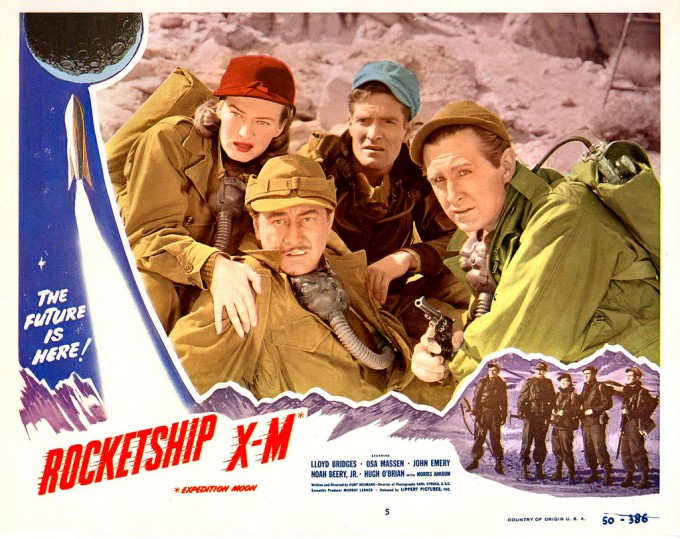 After the abysmal sci-fi decade that was the forties, fans of the genre finally got to look forward to well-made, original, lavish, high-quality – actual – science fiction films. The spark that ignited the explosion of A-list science fiction films about space travel in the early eighties was a costly gamble of 600 000 dollars, in lavish colour, co-written by author Robert A. Heinlein, that won an Oscar for special effects and was nominated for another for art direction – the first American moon landing film that strived for scientific accuracy. Except that was not this movie. That movie was George Pal’s Destination Moon (review). This film is the low-budget, black-and-white quickie produced by Poverty Row studio Lippert Pictures about a rocketship that accidentally end up on Mars instead of the moon and meet the family from The Hills Have Eyes. END_OF_DOCUMENT_TOKEN_TO_BE_REPLACED