(4/10) Tômei ningen or The Invisible Man, released just prior to New Year’s Eve 1954, was Toho’s second science fiction film and Japan’s second invisible man film. Filmed in a rush to capitalise on Gojira’s success, the movie has its moments, and Eiji Tsuburaya’s special effects are fairly solid. A complete departure from H.G. Wells, Tomei ningen serves up touching some touching drama and a generic film noir mob plot, and mixes in some song and dance numbers. This was a time when clowns were still good people.

The invisible man helps Noriko Shigeyama, a damsel in distress.

With some few exceptions, science fiction movies were an all-American affair in the early fifties. However, in 1954 something came along and changed that, and that something was Gojira (review), that with a single stroke made Japan a contender in the genre. However, the big rubber monster didn’t represent the first sci-fi film in Japan. That honour goes to Tômei ningen arawaru (1949, review), or The Invisible Man Appears. Made for movie studio Daiei, the invisibility effects of that film were made by Eiji Tsuburaya, who five years later had moved to Toho, and helped bring Godzilla to life. In 1954 Toho apparently wanted to do their own version of that film, simply titled Tômei ningen (透明人間), or The Invisible Man, and who else would create the special effects than the father of tokusatsu, Tsuburaya?
END_OF_DOCUMENT_TOKEN_TO_BE_REPLACED

(5/10) In a nutshell: This 1952 movie, Min aina laka haza? in Arabic, has the distinction of being the first science fiction movie of Egypt. Starring four of the biggest movie stars of the country and directed by the B movie specialist and effects innovator Naizi Mostafa, this film is inspired by Universal’s Invisible Man films, but plays out as a romantic musical comedy. A fun, light-hearted and well-made popcorn movie that is enjoyable even without understanding the dialogue.

Muhammed Fawzi becomes invisible in Niazi Momammad’s Where Did You Get This?

This is a rare entry on this blog of Arabic science fiction cinema, which is certainly not a huge subgenre, but nevertheless not to be completely overlooked. As a prosperous, stable and fairly secular country, Egypt was long the dominant film producer of the Arab countries and the golden age of Egyptian cinema lasted from the forties to the sixties. To a modern viewer, the liberal take on violence and sex in of some of the genre films of the golden age is surprising. Where Did You Get This? is in comparison a rather timid little film, and like much of the genre cinema of Egypt in the day, it was a blatant ripoff Hollywood’s genre films, in this case the Invisible Man franchise by Universal. END_OF_DOCUMENT_TOKEN_TO_BE_REPLACED

(5/10) Tômei ningen arawaru or The Invisible Man Appears has the distinction of being Japan’s earliest preserved science fiction film. More inspired by Universal’s Invisible Man films than H.G. Wells’ novel, the film concerns a mysterious invisible man out to steal a diamond necklace. This crime mystery drama meets tokusatsu film boasts the special effects of the great Eiji Tsuburaya and a superb performance from one of Japan’s biggest cinema legends, Takiko Mizunoe; a singer, dancer actress, gender bender and union activist who would go on to become Japan’s first female movie producer at a major studio.

Here’s one that got away! I finally managed to find an online copy of the Japanese film Tômei ningen arawaru (透明人間現わる or The Invisible Man Appears), made in 1949. And lo and behold! It even had English subtitles – unusually good subtitles, in fact. Now, I won’t be able to give you as detailed information on this film as I normally do, since there is not a lot of information about it online in English. What I know about it I’ve picked up from Japanese sources. I don’t read Japanese, and Google translates the language into almost unintelligible English. Please let me know in the comments below if I’ve misunderstood something or if you have any additional information on the film! END_OF_DOCUMENT_TOKEN_TO_BE_REPLACED

(5/10) In a nutshell: The fourth of Universal’s invisible man films, made in 1942, has a Griffin descendant fight Nazis in Germany. The special effects are impressive, as is much of the cast, incliding Cedric Hardwicke and Peter Lorre. But the comedy is lame and the script by Curt Siodmak falls far from his best efforts. Still, it is fairly entertaining as bit of a jumbled spy thriller. 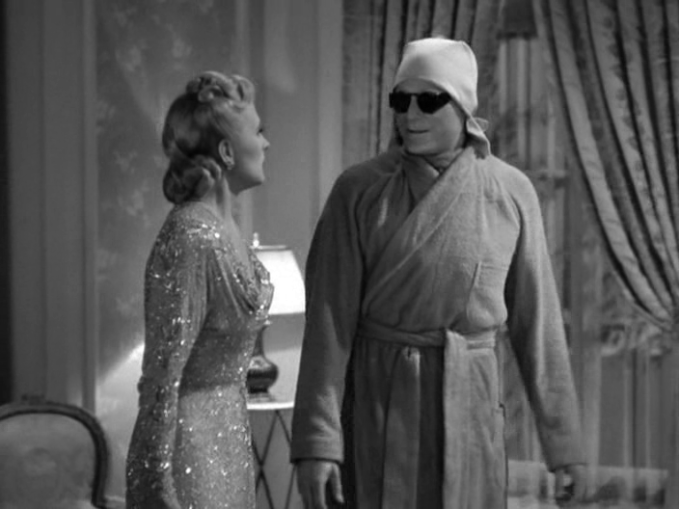 I almost feel like I’ve got to apologise for posting yet another bland five-star review. But that’s just the thing with a lot of the sci-fi in the late thirties and early forties. The momentum that drove especially the mad scientist subgenre in the first half of the thirties was gone, and many of the directors that created such visionary films had been replaced by studio hacks. But on the other hand: even when relegated to Povery Row studios and bigger studios’ B units, there was still a lot of talent surrounding the genre, who were often able to elevate the films above their slight budgets. Such was the case with Invisible Agent. END_OF_DOCUMENT_TOKEN_TO_BE_REPLACED

(6/10) In a nutshell: The third ”invisible man” installment is a good, solid comedy with a great female heroine, but hardly brings anything new to the sci-fi table.

Virginia Bruce not seen in The Invisible Woman.

Number three in the Universal Studios Invisible Man franchise takes the humorous elements of its predecessors to a new level. While James Whale added his pitch-black witty comedy to The Invisible Man (1933, review), it always remained at heart a horror film. Joe May toned down the horror for laughs in The Invisible Man Returns (1940, review), but still kept the serious mystery thriller element dominant. With director A. Edward Sutherland, one of the original, Keystone Cops, it is slapstick comedy all the way, and now there is very little, if anything, to remind the viewer of H.G. Wells’ original novel written in 1897 – which still gets screen credit. END_OF_DOCUMENT_TOKEN_TO_BE_REPLACED

(7/10) In a nutshell: The horror icon Vincent Price takes over the empty shirt and trousers of Claude Rains in The Invisble Man Returns (1940). Univeral was still making good sequels to their horror films, although this one does clearly fall into B-movie category. But this is a good B-movie, well acted, well filmed and well received, but a harmless Hollywood sequel nonetheless. 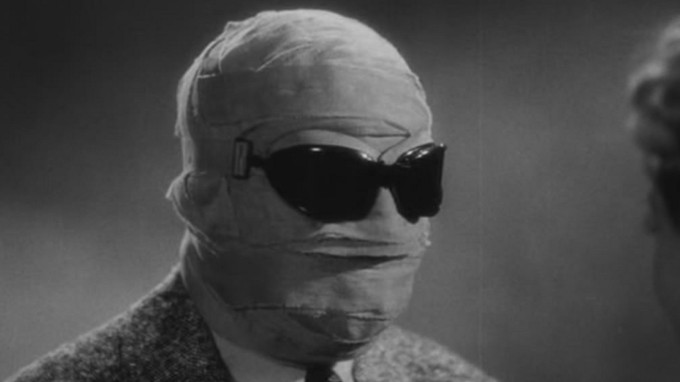 The bandaged head is back! Now in the profile of Vincent Price.

When Universal bought the rights for the novel The Invisible Man from author H.G. Wells for their first film (1933, review), they made a contract for several films. But it would pass seven years before the studio re-opened the Invisible Man files again in 1940. By now Frankenstein had had both a Bride and a Son, and Dracula had a Daughter, so it was no more than fitting that The Invisible Man should have a Return, and later the same year The Mummy also got a Hand. Of course undead beings like Frankenstein’s monster, Dracula and The Mummy were easy enough to reanimate, but things were slightly more complicated with the invisible man, Jack Griffin, who was very much an ordinary man. So despite the fact that Claude Rains had made such an impact with his role seven years earlier, it was decided that a new invisible man was needed, as Griffin had very clearly died at the end of the previous film. And rather than bring in a Lugosi or a Karloff, Universal decided to do what they did with The Invisible Man – that is to cast a relatively unknown actor with a fantastic voice, and reveal his face in the last scene. This actor turned out to be a young Vincent Price in his first major role, and once again the casting agents at Universal had scored gold. END_OF_DOCUMENT_TOKEN_TO_BE_REPLACED

(8/10) In a nutshell: Lead actor Claude Rains does a tremendous job of not being seen in Universal’s classic 1933 horror sci-fi. The special effects are bind-boggling for their day. Una O’Connor screams and the rest of the cast are able, although their characterisations are written down on the back of a matchbook.

The invisible man makes his entrance.

The early thirties were indeed a time of magic for Universal Studios. In just three years they were able to conjure up four of cinema’s most beloved, successful and influential monsters. After Dracula and Frankenstein (1931, review) came The Mummy (1932), and in 1933 it was time for The Invisble Man to – not – reveal himself. Seated in the director’s chair was once again Briton James Whale (Frankenstein), but this time the monster wasn’t played by either Bela Lugosi (Dracula), nor Boris Karloff (Frankenstein, The Mummy), but by the relatively unknown British actor Claude Rains – and once again Universal’s casting proved itself a stroke of genius.  END_OF_DOCUMENT_TOKEN_TO_BE_REPLACED