In a nutshell: In yet another George Méliès-ripoff, the father of UK sci-fi films, Walter R. Booth, takes a car on a trip to Saturn and back in this hilarious 1911 short film. 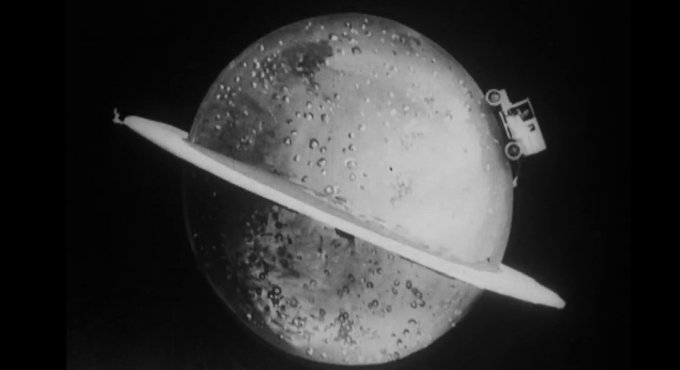 The car is on Saturn. We don’t know how it got there.

A bridegroom takes his bride on a honeymoon in their car, which has a robot driver. When they are stopped by a policeman, they knock him down and tie him to the back of the car, and drag him along, through London, up on the roof of Buckingham Palace and all the way to Saturn, where they drive around the rings a couple of times before crashing through the surface of the planet and encounter the inhabitants, who take the poor policeman hostage. But don’t you worry, he soon becomes the lover of the queen of the planet, and the sit snuggling on the rings of Saturn. The car then falls off the planet and back to Earth, where it first falls into an geyser – and then apparently into the sea – and then … something happens, because they are suddenly spinning in the air, until a guy shoots them down with a rifle. The couple lands safely back in London, but the robot is ruined. END_OF_DOCUMENT_TOKEN_TO_BE_REPLACED

(4/10) In a nutshell: An action-packed British short from 1909 depicting future warfare with missiles and airships. Marred by amateurish design, sloppy trick film and an uninspired script.

One of the early innovators of British cinema was Walter R. Booth, working together with camera maker and producer Robert W. Paul in the late 19th century to create similar trick films that were being pioneered by Georges Méliès in France. In 1899 he directed Upside Down; or The Human Flies, where he made people seem to walk on the ceiling by simply turning the camera upside down. In 1901 he made the first film adaptation of Charles Dickens’ A Christmas Carol, and in 1906 he made Britain’s first animated film by drawing on the frames. In the same year he took his first foray into sci-fi with a 2 minutes long film about a motorist fleeing the police around the rings of Saturn with the film The ‘?’ Motorist – which he would expand on in 1911. But his first sci-fi film of any substantial length was he 1909 film The Airship Destroyer. END_OF_DOCUMENT_TOKEN_TO_BE_REPLACED