(8/10) In a nutshell: Although the plot does completely disappear when the dinosaurs enter, this 1925 classic is still as thrilling an adventure as it was when it was released, and Willis O’Brien’s revolutionary stop motion animations still holds up to scrutiny.

At some point when reviewing these old silent sci-fi movies it starts getting a little tedious to introduce them as ”the first film to blah blah blah …” But you really can’t help it. During the twenties not many sci-fi films were made, and even fewer before that. Those that were made will almost by default be the first to introduce something. And – if you want a first of something, then few films are as apt as The Lost World. This is the first full length film to feature a lost world, the first full length film with dinosaurs, and stop-motion animator Willis O’Brien’s first involvement in a full length film.

No rating due to partially lost film

In a nutshell: This 1918 short by stop-motion wizard Willis O’Brien is probably the first film to describe time travel, and is a showcase for O’Brien’s marvellous stop-motion dinosaurs. 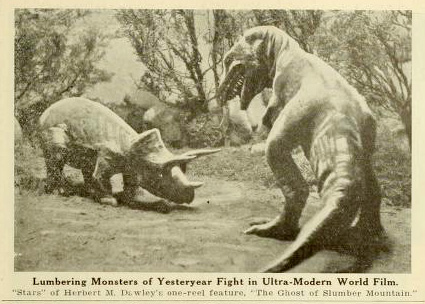 Promo still from the film.

I usually don’t review short films when we start getting into the realm close to 1920, but I allow myself a few exceptions when pioneering concepts, themes or techniques are involved. Such a film is 1918/1919 short The Ghost of Slumber Mountain. It is considered by many to be the first film to deal with time travel, and one of the first where special effects pioneer Willis O’Brien (The Lost World, King Kong) combined live action with stop-motion photography. The first one was The Puzzling Billboard (1917), where a goat eats a billboard at the end of the film. It is also essentially the first film to depict a time machine (although that is debatable). O’Brien also wrote and directed the The Ghost of Slumber Mountain, and it was produced by Herbert M. Dawley, who also played the lead as Uncle Jack Holmes. Willis O’Brien plays the ghost of Mad Dick. END_OF_DOCUMENT_TOKEN_TO_BE_REPLACED