(4/10) In a nutshell: 10 years after the big splash with A Trip to the Moon, director Georges Méliès rehashes all his old tricks in 1912 film that is technically ambitious, but narratively old hat and a bit misogynous.

The ice giant eating the explorers.

By 1912 the pioneering French filmmaker and father of the sci-fi film, Georges Méliès, was merely repeating himself. Despite impressive production values and an gigantic puppetteered ice giant, The Conquest of the Pole really brings nothing new to the table. Although the theatrical and stagey setup was made by choice, and a trademark of Méliès’, it does seem archaic in a time when D.W. Griffith was producing films like Birth of a Nation and Intolerance. 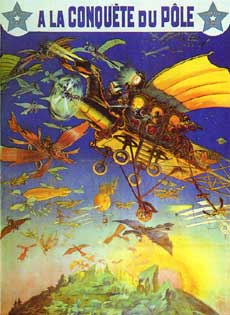 The film basically start in the exact same way as A Trip to the Moon (1902, review) and The Impossible Voyage (1904, review) – scientists argue in a room, then decide to leave for an impossible journey – although having already been to the moon and the sun, the North Pole hardly seems like much of a challenge. Up they go in an airplane (hardly science fiction even in 1912) and fly past the the stars and a few planets, as always in Méliès’ films represented by beautiful women in white robes. This has nothing to do with the plot, since they aren’t even travelling in space, but I suppose he just coudn’t help himself. They land in the Arctic, where they encounter a giant torso of an ancient ice man, smoking a pipe, who eats one of the expedition members. They finally overcome the giant with a cannon and reach the geographical North Pole, and the turning axis of the Earth, which they climb up on and break, thus falling into an icy pond, before being rescued by another party travelling by airship. There is also quite a misogynistic subplot about a group of suffragettes trying to reach the pole and failing.

Technically Méliès is a master director, but this time not even the camera tricks are very accomplished. There are clearly visible wires in a bad superimposition shot and the jump-cuts are unusually sloppy for Méliès. He takes 30 minutes to tell a story which he would have told in 15 minutes ten years earlier, and the whole thing drags, especially a scene with animated airplanes flying through the skies, which goes on for ages. I gave 10/10 points for Méliès’ film A Trip to the Moon, that was made in 1902, because it was such a stunning piece of work for its time, from a director with a unique vision and a wonderful sense of storytelling. This sense of adventure is still present in this film, as is his sense of humour, and as a film it is not a lot worse than A Trip to the Moon. But the reusing of old ideas make for a slightly dull experience, especially if one has viewed his earlier output fairly recently. We get the exact same setup as in the older films: first the scientists’s debate, then general acclaim, and then we visit the workshop. We see theatrical wheels and levers turning and a half-finished craft being built. Then the takeoff with some drama, a flight across the stars, a landing where some piece of set gets knocked over and a struggle with the elements and the inhabitants of the new world, and lastly a dramatic return home. One of the treats of the film is the ice giant, which was (not very successfully) puppeteered by 12 stagehands. It is constantly out of sync and comes across as a huge drunken marionette, but is in fact very charming. And in fact, one might see this as the very first giant monster movie. 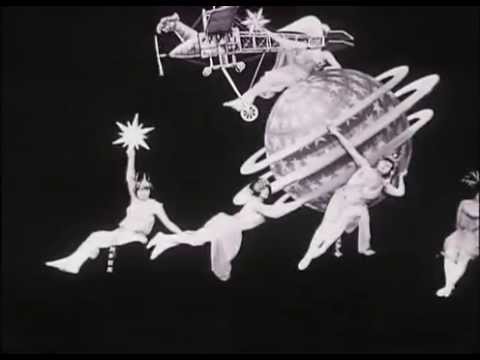 And here come the star ladies once again.

The film was highly praised by the contemporary critics, who had already dubbed Méliès as the ”Jules Verne of the cinema”. They praised his sense of adventure and technical prowess, and rightly so. But the film was a complete flop with the audience worldwide, who had already moved on from Méliès’ theatrical storytelling style to more realistic films.

The film is not based on any particular story by Verne, despite the fact that Verne’s name was plastered over the posters. One can see it as inspired by The Adventures of Captain Hatteras or The Sphinx of the Ice Fields, but in reality it was more inspired by the ongoing debate over whether Robert Peary or Frederick Cook had reached the North Pole in 1909, and by Norwegian Roald Amundsen definitely reaching the pole in 1911.

Ah, the silly suffragettes are trying to take off with party balloons.

By 1912 Méliès was already in financial straits because of a string of unfortunate circumstances. One was that the American film industry had made it hard for foreign films to be distributed with any profit in the US, another that his brother Gaston had made some poor decisions regarding international distribution, which left Méliès in debt. The financial failure of The Conquest of the Pole made matters no better. He made four more films, including a version of Cinderella, where he tried to adapt to a realistic setting, rather than the theatrical backdrops, but that film was severely cut by the studio Pathé, and was also a flop. In 1913 he dropped out of filmmaking, partly because of his financial problems, partly because of the outbreak of WWI in 1914, and partly because of the death of his wife, which meant he had to take care of their 12 year old child by himself.